Rosebud Ben-Oni’s poems came to me on the wings of sparrows, feathers sorting down onto the streets of México, Jerusalem, and New York. In Solecism, her book of poetry published by Virtual Artists Collective, her sparrow wings move between identities, always loyal to the complexities of her ancestry. Born to a Mexican mother and a Jewish father, “the love child of sparrows and curmudgeon trees,” she explores her sense of identity, of place, of both belonging and fragmentation. She travels her words through México, bodies washing up on shore, through funerals and bombs and the soft arms of a woman in Jerusalem, returning to the 7 Train in New York. If you were to ask her what it was like to survive a bombing, in “Proof of Absence” from Mount Scopus, an Israeli enclave in Arab East Jerusalem, she would reply:

People who I don’t know at all

a bombing. They are shocked

I can’t get out of my head.

That it was not more meaningful

To have survived a bombing is perhaps why her work takes flight with sparrows. The small city birds of survival, sometimes unnoticed, but there. You will find them in Jerusalem, in Salsipuedes, a Colonia in Tijuana, México, and in Brooklyn, descriptions of their molting wings pressed into the pages of Solecism.

Her México is filled with locusts, and water hyacinth and hydrilla across the river from “Sal Si Puedes.” Translated as “Leave If You Can,” Ben-Oni’s poems underwrite the storied México, and return us to the spaces between riverbeds and border crossings. When she writes, “Undying is spinning backwards, sand in my rubberbanded hair,” there is a delicacy and a subtle edge to the sexuality that is part of both living and dying in her poetry. I could see Ben-Oni there, sitting barefoot on the beach, “jellyfish outlining beer bottles.” Her poetry holds the tension between innocence and what lies beyond that soft space:

A warning from where mermaids

Siesta in the shark’s atrium.

And again later in Sal Si Puedes, she resurfaces between the shadows of kerosene lanterns:

accessible as the savage wants

against a narcotic wire

We return on wings, on the backs of sparrows, on birds with fleeing feathers. “For the Mixed Child with Pale Skin,” Ben-Oni writes in the conflict of mixed heritage; she becomes that molting bird of feather, excluded from the flock. No place to land:

bits, some say you gentrify the ghettos of the canon,

Whitewash over the boredom of limited choices,

the Other that no one will claim, your parts don’t look

the part in anything.

if you’re pretty, consider the patronage of nature

But never the sparrow,

She goes on, writing her mother’s Mexican town across the border, and then in the end she becomes like the sparrow in her adaption, in her ability to fit in, to recross borders, to recross the distance that spans inside herself as a daughter of migrants:

You are her past – stories told in embarrassment

And yet adaption has made you

in the fray, stealing crumbs from larger birds

Ben-Oni writes Jerusalem as intimate portraits: a funeral, a woman’s arms, a small cell of the Dead Sea, rather than the sea as large and vast, a woman and an iron bed frame, an absence of cigarette smoke. In Hebrew school she couldn’t separate her speech from her mother’s Spanish tongue; she was no longer the pale child seen as gentrifying ghettoes. In Hebrew school she becomes the dark haired child:

In Hebrew School you could not hide

your mother’s tongue, the trilling Rs

and dragging intonations from your Israel

as Ester for the Passover play

because Ziva thought you a dark thing:

Ben-Oni moves between these worlds: her loyalty to both her Mexican and Jewish communities, yet she is always that bird, that sparrow, moving between countries, cultures, and languages. Perhaps in her ability to become that bird, at times molting, at times flying, at times hovering, and waiting out the hurricane, she has survived, and even become, again and again.

In the end of the book, she flees the suicidal birds in “Crop-dusting in the Desert,” their desire of death:

Even the birds have gone suicidal: the cracked body

a pyre, lusting to die. From ashes, a storm of poison.

She arrives in Brooklyn, where she catches breath between the fragments, between the sparrows and surviving locusts. She rides the 7 train toward Flushing, then calls herself the songless bird in the waiting room, in baggage claim, in the light shed by streetlamps, in the impending darkness. She is there: that sparrow of her dreams, but singing now, singing survival, memory, and hope. 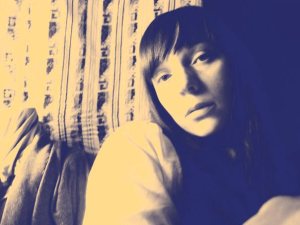 Sarah Maria Medina is a poet and a fiction/creative non-fiction writer from the American Northwest. She is Boricua, of mixed heritage. Her poetry has been published or is forthcoming in Winter Tangerine Review, Raspa Literary Journal, As/Us Literary Journal, Codex Journal, Semicolon Journal, Luna Luna Magazine, Qu.ee/r Magazine, and elsewhere. “Iced Cake Frosting,” an excerpt from her forthcoming memoir was recently featured in Lit Journal Midnight Breakfast. She’s also the author of a chapbook of poetry titled Girl Turnin’ Queen and Other (Broken) Havana Love Stories. She lives in Mexico with her daughter, and is at work on her memoir, A House by the Sea in Havana. www.sarahmariamedina.com