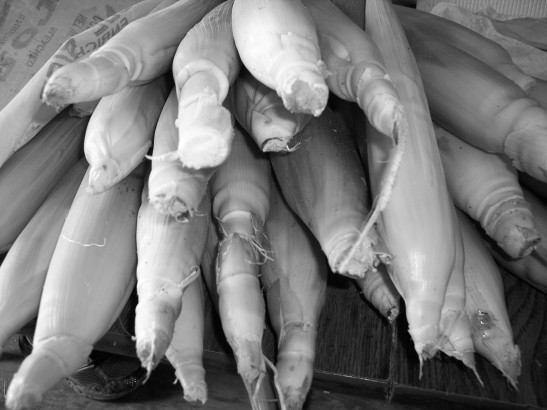 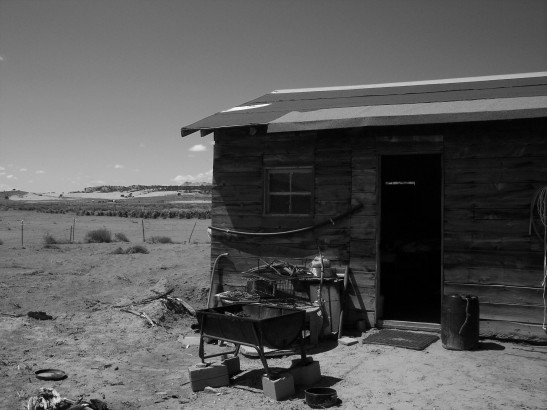 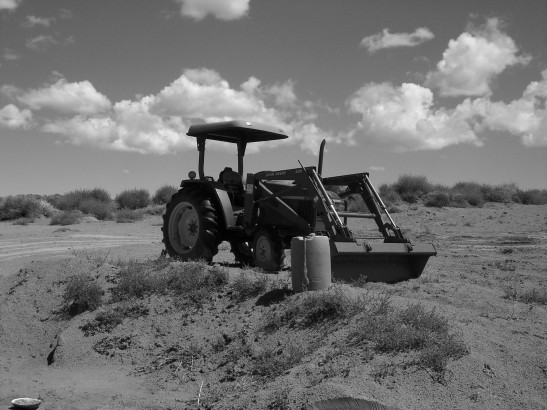 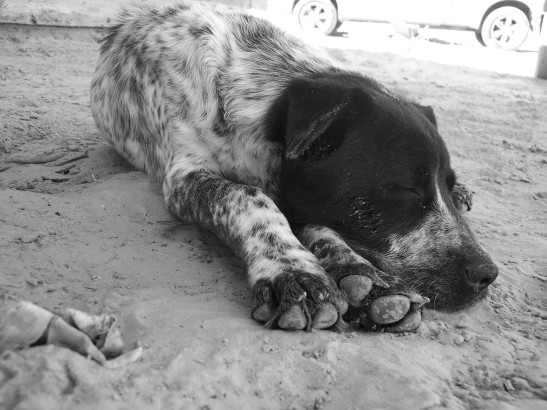 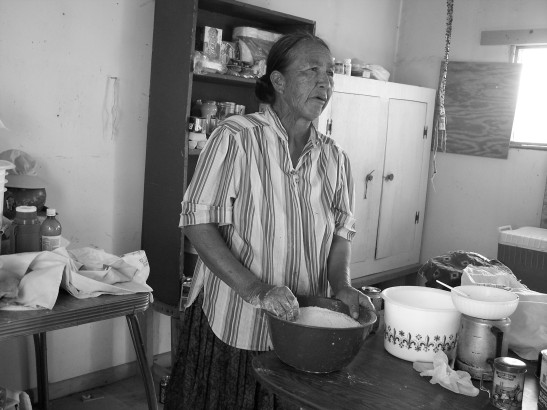 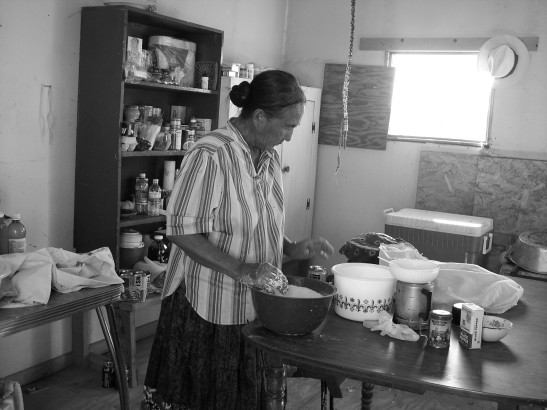 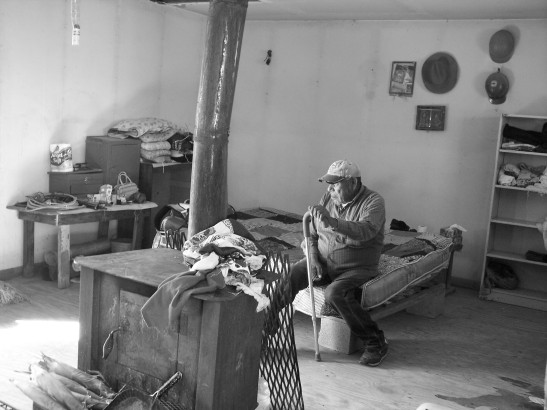 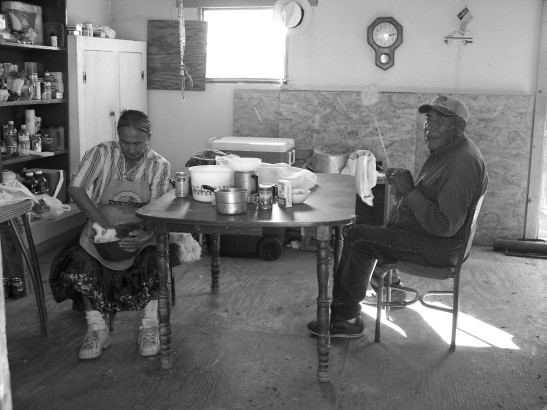 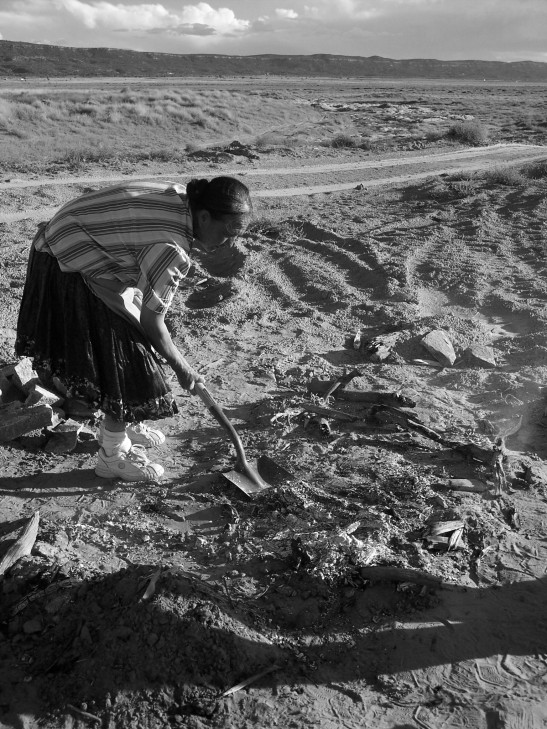 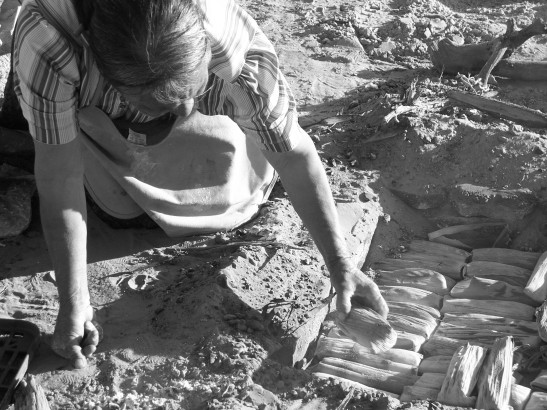 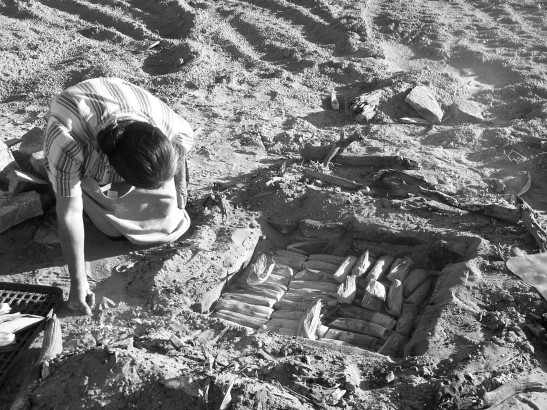 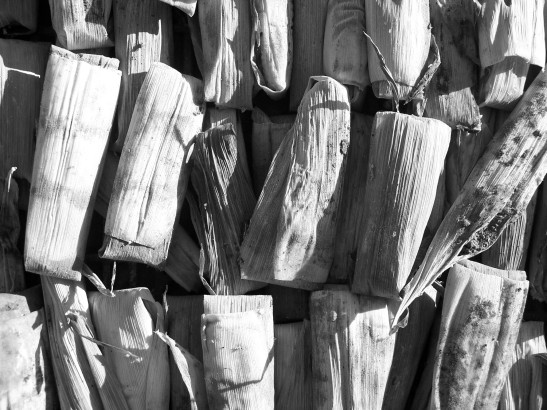 The corn would be gathered by the armload, each of us carrying as much as we could back to the house, then going back out for more.

“Don’t pick the large ones.” my grandmother would instruct, “Those are better for roasting.”

We remove the husks from every ear, saving all the large flat husks to be washed and set aside for later. It’s always a surprise when you peel open the corn to reveal the shiny plump kernels underneath, all in a row. Sometimes you find gold, sometimes blue, sometimes deep maroon, and sometimes caterpillars.

Like a well-oiled machine, we work an assembly line of skilled and precise corn manipulation, and my grandmother is the foreman. My mother uses a knife to cut every kernel from their root into a large bowl. My little brother takes the kernels by the handful and drops them into a hand grinder attached to the counter while my older brother turns the handle, over and over, to produce a thick milky pulp. I stand next to my grandmother, both of us dipping our hands into the corn mush, and spreading it generously into the leaves we saved from before. We fold the husks to form little loaves and tie them closed like presents. The corn has come full circle, once again returning to the husks from where they came.

Meanwhile, my father and his father are outside tending to the fire. The logs of juniper have reduced to glowing embers, and the ground oven has been prepared to receive the loaves we prepare.

The oven is a shallow square cavity, dug from the Earth and reinforced with stone bricks. My grandmother kneels on the ground next to it with her full skirt in the sand and delicately places each raw loaf in the oven one by one. This act is precisely how the Navajo gave this bread its name, N’tsidigoo’i, which translates to “Kneel Down Bread”. She moves a sheet metal cover over the hole and uses a shovel to pour layers of dirt, then hot embers on top. The corn has come full circle, once again returning to the ground from where they came.

The loaves sit in their underground kiln, hardening and transforming; the smell of the soil and the dusting of ash influencing the flavor of each. I help clean the table in preparation for dinner and think of what a blessing it is to have this experience with my family. My path to becoming the man I am today, deeply influenced by these softer moments, baking bread, cooking food, and spending time with my grandmother. My brothers and I spent our entire lives observing our mother, grandmother, and generations of strong women – their knowledge, abilities, and strength. Through their virtues, we learned how to be men. Men rooted in traditions, doing the work that needed to be done regardless of any gender roles, and doing that work well because you care for those you do it for. Just like the Kneel Down Bread in the oven, transforming with the Earth all around it, our view of the world is completely shaped by these moments.

The sun falls lower in the sky and we are finishing our dinner.

“The bread should be finished now,” says my grandmother. “Let’s take them out before it gets dark.”

How she knows just when to take out the Kneel Down Bread without using a clock or timer, is a mystery to me. We open up the oven to find the whole batch steaming and fragrant. The best time to eat them is now. It’s comforting to know that some things never change: the taste of the first Kneel Down Bread out of the oven, the traditions of my people, the love between a man and his grandmother, and also the corn, arriving every fall, beckoning us back to the cornfield.  We come full circle, once again returning home from where we came. 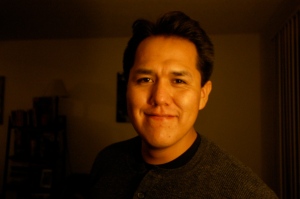 Aaron Yazzie, Diné, from Holbrook, Arizona is Ashįįhí (Salt Clan) and born for  Todích’íi’nii (Bitter Water Clan). He graduated from Stanford University in 2008 with a Bachelor of Science in Mechanical Engineering. He now works at the NASA Jet Propulsion Laboratory in Pasadena, California as a test engineer for the Mars Science Laboratory Rover, Curiosity. He is a Sequoyah Fellow of the American Indian Science and Engineering Society (AISES), a group that works to increase the representation of American Indians, Alaskan Natives, and Native Hawaiians in the fields of science, engineering, and other technology related disciplines.