I grew up in Oklahoma, where even my most stringent English teachers could not help but to inadvertently teach us the interchangeability of vowels by slipping back into the ones we could all relate to, by telling us to warsh our hands, cracking open a sody-pop, and momentarily abandoning their posts as our monarchs of grammar. And it was the language we grew up closest to, not the language taught to us that held fast. I could not catch a ball, but occasionally I might kitch a cold. There weren’t things to do, but there were thangs we done; and although I can’t call it my home anymore, I use to could, and it is to that place that I owe thanks for a careful ear and selective honesty.

I was unaware of any dialectical differences between myself and the rest of the English speaking world until I travelled to the east coast where I wore my origin like a name badge that said simply, Ignorant. When I told people where I was from, the response was often something like, “Oklahoma… Don’t you still have, like, tipi’s and stuff?”

While much of the supposed ancestry of my family is Cherokee, we are only visibly defined by high, flat cheek bones, and square jaw and dark hair, and a certain something about the bridge of the nose, the somber, worried brow, and the ususual contrast of dark and lightness, I only knew two people who spoke the language. When I was growing up, all I saw of the supposed “Red Man’s Land,” had been chipped at, reduced, exterminated and reintroduced as a kind of educational model village, a diorama of mud houses, Hogan-style tourist shops strung with faux furs and miniature tom-toms and beaded pleather moccasins, an old sweat lodge smudged with blue graffiti that had been covered in off-white stucco.

I gave our pets Indian names I learned from a middle-aged, white woman who’d spent most of her adult life wishing she had blood like mine. Yahni. Wasapi. Nashoba. I felt that a Native language held some kind of mysticism, a map back toward a way of life I would never know anything about, the last of it hidden in council halls and buried beside my great-grandmother, who was taught to believe that if a man told you that he liked something of yours, it already belonged to him.

If one thing held, it was a long, tiresome history of hushed alcoholism that came with a language and dialect all its own. There was, in particular, my uncle’s Johnny’s voice, the sound of liquid closing around a shell, and holidays when he would begin to sing something that my great-grandmother used to sing and would start to cry and my mother would usher me away, rolling her eyes.

It didn’t take very long for me to lose my drawl. I think it might have to do with attachment issues and discovering poetry. But it has required a fair amount of time, distance, and a sort of spiritual displacement for me to see them all from the outside; the way I must see it in order to write it, to catch its syntax under the gills, to understand and reproduce its patterns and lilts and fluctuating tides. For one thing, there is the issue of transitive verbs. ‘Was’ and ‘were’ are often interchanged: We wasn’t happy and he were’t neither. Single syllable words sometimes gain a syllable while longer words are gutted to their essentials. The word “well,” for example, when used as an exclamation or when thinking, becomes a two-syllable sound, a fishing line dragged under the boat: Way-uhl, ahl be damned. Thar goes mah line. And there are the words so regularly placed together with no breathing room to separate them, that they have become entirely new words such as “owder” and “gitcher,” as in: Er you owder yer goddang mahnd? Gitcher ass back in that boat.

It’s difficult to write about words without mentioning names, the word one probably hears or writes more often than any other. I can’t help that my father and I share a name or that the nasal-heavy “ran” and abrupt deflation of “dee” are more or less, inescapable. In any number of accents or languages or dialects, it will always sounds the same and English doesn’t allow for any phonetic leeway in the final letter. My “i” will always sound like his “y” and, like tires on an eighteen-wheeler, if one rolls, so will the other, reminding me that despite all efforts, I will always be a little more like my father than I’d like to admit, subject to same wrecks of conscience, speeding fines, and arrhythmicheart.

But in the name, too, there is some resonant familial noise, and long after they’ve all gone, I will remember maybe most of all, the sound of my own name. I will remember the emphatic iamb they made of my middle name, Nicole, (which I despised), as though there were an exclamation point permanently attached to the end of it, the same way they would like to attach an exclamation point to the end of my life, hoping that eventually I will do something worth exclaiming about in a southern gospel, praise Jesus, Mary, and Joseph, sort of way, or perhaps across some smoke-filled bar, my dad with his long black hair, playing bass, or like a clanging bell, my aunt’s voice from across the casino, or someplace by the lake, while we all have muddy feet and in the rare occasion we’re all happy at once, all the drawling, high-pitched multi-syllabic yodeling adjectives of greatness. I will remember the sound of my name across the house, answering to it, saying, I’ll be right there, and all the while thinking that most of all, I’d like just a little bit of quiet, just so we could hear ourselves speak, and later wishing too that I could put the pen down, that the song could simply go on and on and on, and find myself wishing still that I could just listen, hold it close to my chest, and hear nothing but the song itself. 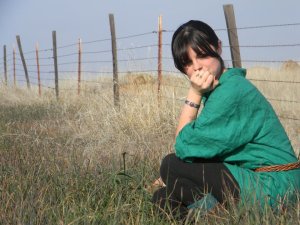 Randi Ocena is a native of Oklahoma and studied creative writing at the University of New Mexico. She is currently enjoying her life as a Castaneda fellow in the MFA program for fiction at Indiana University, but her heart belongs decidedly with her wife and with the Sandia Mountains, both of which still reside in Albuquerque. Her work has appeared in Threepenny Review, Kenyon Review, Michigan Quarterly Review, Ramshackle Review and is forthcoming in Ploughshares.