Living on the Borders:
Reflections of an Invisible, Indigenous, Queer, Adoptee Searching for Culture

Living in the borders

I have always known I was adopted, and am still frequently reminded. The story I hear about my adoption is always the same. I was two weeks old, and they found out the day before they picked me up that they were approved to adopt a baby. They bought a new car to make the drive to Vernon, where they picked me up. My mom had two ectopic (tubal) pregnancies and could no longer make her own babies. They had waited seven years to adopt a baby and were beginning to look outside the country. But the most common thing I heard from them was “You’re special…we CHOSE you”.

When my parents adopted me they were not concerned about the sex I was assigned at birth, they just wanted a baby. As far as they knew, they had adopted a tiny, White, baby girl, and would proceed to raise me as such. From the time I began Kindergarten, I knew there was something different about me. Between the ages of four and seven, I came out as a “boy” many times, and overcompensated in my “girl-ness” when I was told NO. I came out again as a senior in high school, this time being adamant that I was not a girl, although “boy” never fit quite right either. I didn’t fit in, despite how much I tried.  As I continue to grow and explore my gender, I now identify as gender non-binary. I am somewhere in the borders, in between, liminal. Much like my gender identity, my sexual orientation is fluid, open, and queer[1].

Complicating this intersectional experience of gender and sexuality is my racial identity experience. I found out much later on in life that I was not White as I had been lead to believe. Contact with some biological siblings let me to discover that I am Iroquois, a tribal nation of the Northeastern U.S. and Eastern Canada. In order to be adopted by a “nice, White family”, and because I passed phenotypically as White, social workers involved in my adoption took the liberty of deciding my racial identity for me and did not check the First Nations box, instead marking me down as White. Growing up, people would often ask (usually right in front of me), “Where did you adopt her from? China?” They judged my eyes, my dark hair, and my skin colour; and for years I tried to blend in to look more like my parents, more White. I stayed indoors during summer.  I dyed my hair to be lighter. I did this to assimilate. But I didn’t know why I was assimilating, or what I was assimilating to or from. There is a way that genetic memory lives in our bodies, even if it is unconscious. My body has always known I was gender non-binary and indigenous. Coming to terms with this in a society that divides identities into fixed categories – straight, gay, man, woman – has not been an easy task. Yet, my being exists in the spaces in between these rigid categories.

The English word “Two Spirit” was coined in 1990, and is a contemporary word that indicates a First Nations person that embodies both feminine and masculine spirits (Driskill, 2011). Two Spirit is meant as “an umbrella term for Native GLBTQ people as well as a term for people who use words and concepts from their specific traditions to describe themselves” (Driskill, 2011; p. 390). Like the Eurocentric umbrella term “queer”, Two Spirit is meant to be “inclusive, ambiguous, and fluid”. While “queer” usually refers to sexual practices and identities, Two Spirit puts gendered identities and experiences at the centre. Some First Nations people embrace the term Two Spirit, while others reject the colonial GLBTQ terms, and others “move between the terms depending on the specific rhetorical context”(Driskill, 2011; p. 390).

As a person who is First Nations, but has been assimilated into White culture without knowing Iroquois culture, it has been a struggle for me to figure out where I fit in these dynamic definitions. Should I identify myself with my oppressor’s words – transgender, non-binary, gender queer, pansexual, gay, queer? Or should I use the cultural term Two Spirit even though I have lost my culture? Until recently, I thought I should not use Two Spirit because of the missing cultural aspect, but as I begin to realize I am finding my culture slowly, I have been inviting myself to explore what it means for me when I do identify as Two Spirit, and what it means when I identify as a member of the GLBTQ community. I have determined through writing that I do in fact, belong to the Two Spirit community, and as such, am still part of the trans and queer communities.

In my Two Spirit identity, I am faced with the recognition that my adopted family will never understand the entirety of my identity and even I must decolonize myself in order to truly come to know my being as a Two-Spirit person. This decolonization takes place slowly, over time, and leads to conflicts between my Iroquois self, and my assimilated White self. The results are often confusing, and lead to me questioning more and more whether or not I should have been adopted, or placed in a foster situation, where I may have kept my culture. It also brings up the question of whether my queerness or Two Spirit identity would have been accepted any better in one situation over the other.  Heteronormativity and homophobia through forced assimilation of indigenous people is part of settler colonialism.  Settler beliefs surrounding what they deem as “deviant” sexuality and gender roles via Christianity and conservativism is prevalent in First Nations communities as well, although these communities are slowly being decolonized. I may not have been any better off in the First Nations community surrounding this issue, but I believe I would have been better off surrounded by and learning my cultural identity. At least I would have a sense of where I come from and hence, where I am going.

Being queer and between cultures due to adoption is confusing and an ongoing struggle. It makes me question how cross-culture adoption is handled in society, and whether adoptive families are given enough resources when they do adopt cross-culturally. It also makes me question what it means to be written down as “White” just so one can have a family. I was removed from my biological parents at birth because they were seen as unfit. They gave up their rights to a child they never knew. In turn, I lost connection to my original culture, and gained a culture I was not meant to be part of. My identity is in turmoil, and only time will heal it. This does not mean that I do not love my adopted family, because I do very much, but there will always be something missing, something I will never be able to get back.

Acknowledgment: This essay was written as a student paper for a Gender, Sexuality, and Women’s Studies class at Simon Fraser University. Thank you to Professor Katherine Fobear for encouraging me to tell my story.

[1] By “Queer” I mean a political statement, a repatriation of a term that was once derogatory, but is now used in resistance to describe a way of being that is inclusive of gender, sexual orientation, and politics.  I also mean it as an identity, to mean non-normative. It can also be used in this context as a challenge to what it means to be different, and if there is really a ‘normal’. In regards to the LGBTQ community, it is also used to express sexual orientations and gender identities that do not necessarily fit neatly into a category. 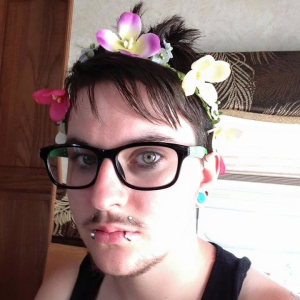 Markus McIntyre is pursuing a Bachelor of Social Work at Dalhousie University, after completing a Bachelor of Arts majoring in Gender, Sexuality, and Women’s Studies at Simon Fraser University. They work to facilitate decolonization within the queer community, and within themself, as a queer, cross-cultural adoptee. Currently they are working to learn about their biological family, and Iroquois/Cree heritage.