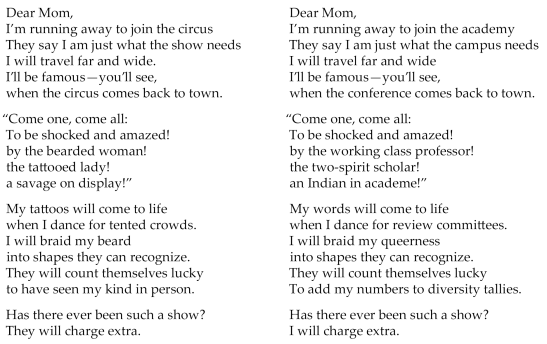 BEFORE WE WERE ASHES

The phoenix is not a bird.
It is a people
whose cycles of life and death come at the force of fires
they do not set
and cannot hope to control.

Where you must outrun a wall of flames,
ducking the swooping talons
of those whose wings carry them so easily in front of the smoke.
You are the only food for miles in a terrorscape of fire.

Where you must dine on the flesh of friends
too slow to flee the blaze,
roasted inside shells made strong enough to carry the world.
They are the only food for miles across a terrorscape of ashes.

They are full of shit.

To my AIS colleagues at UIUC:

We grow up hearing about the trails
named for the weeping of those marched to Indian Territory,
but my sorrow tells me there were also tears
from those who were left behind.

As every valley grasped at echoes
while they shifted from hallow to hollow;
where trees called the dances that keep the world spinning,
but got no response from turtle or gourd.

Like a three story building on Nevada St.
engulfed by silence but for the scratchings of squirrel
scavenging after the fire to build her den
because willow said it might be a long winter. 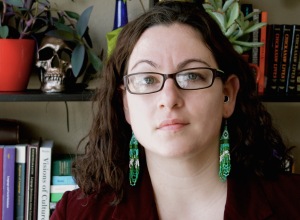 Jenny L. Davis is a citizen of the Chickasaw Nation and originally from Oklahoma. She is an assistant professor at the University of Illinois, Urbana-Champaign. Jenny spends most of her time tending her cats (and cat-sized Chihuahua), plants and the students in her American Indian Studies and Anthropology classes. Both her research and activism center contemporary indigenous identity, indigenous language revitalization, and the Two-Spirit community.