Cat is to dog
as snake is to mongoose
My white aunt tells me not to
Give into “black propaganda”
spread by thug protesters, looting
The intercity she’d never set foot in outside
Of teaching those same black and brown bodies
Sitting pressed
upright in her elementary school classroom
She reprimands them for talking their “gangsta speak”
and negating them their “proper English”
the same proper that their hands raised respectable failed
To get called on in class,
But will get called on by a gun
Will be replenished with gun spray
My aunt figures this would be remedied
With a tightened belt buckle and a diploma
Cop is to protection
As protester is to thug
White is to pure
As black is to impure
I scratch out the mismatch
remove my bones from the closet
Cop is to thug
As protester is to protection
War is to necessary
As peace is to useless
War is to useless
As peace is to necessary
I scratch out the mismatch

Picture is to blurred
As knife is to blunt
The words swirl before my eyes
Imagery bounces above my brain
imaginary
I am clouded in white sugar, lines
Begin to blur into one another on a
Blanketed mirror
I can still think
I can still think
and I wish for that to fade dull

Cocaine is to happy
As sober is to unhappy

I scratch out the mismatch 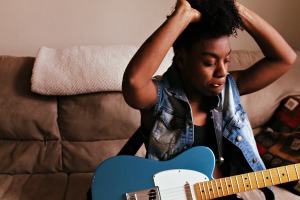 Taylor Seaberg is a spoken word slam poet and musician based in Saint Paul, Minnesota. A military dependent who traveled the world from a young age, Taylor is constantly re-framing her perspective on the world, creating relationships with new and culturally rich context every day.